What if the Beatles Never Existed? 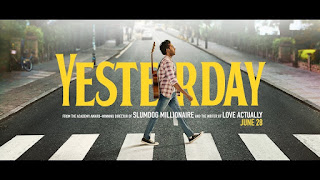 A freak accident lands struggling singer songwriter Jack in the hospital and into a world where the Beatles never existed, at least not as we know them today.  Here's a peak for the first trailer for the summer release.

This one looks like a lot of fun, however I think it's probably a good thing Ed Sheeran didn't write Hey Jude!

Posted by Chases Sandbox at 12:02 PM No comments:

Three of My Favorites

One would think after doing a three or four hour radio show, I would be up for some peace and quiet. Naw.....not really. But since I can't get out today because of all the wind and snow, I'll just settle for three of my favorites from years gone by. The year was 1978. The show was the "Midnight Special" with Wolfman Jack and Journey!  Enjoy!  Thanks to #OldSchoolMusic 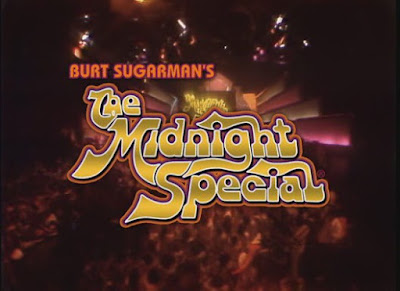 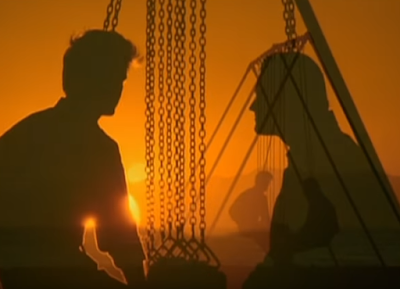 Not exactly something you would expect from a German big band leader, but then James Last was no ordinary musician.  He had a wide ranging repertoire and many hits around the world, but his biggest success in America came in the form of movie soundtrack music collaborations with Giorgio Moroder. One song in particular, The Seduction (Love Theme) was on the soundtrack of both The Seduction and American Gigolo. It was his only true hit in the United States reaching 18 on the adult contemporary charts.  German band leader James Last  with a definite SoCal vibe.....enjoy!

The Ocean Calls My Name 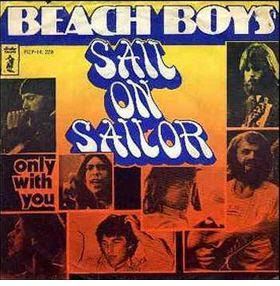 Having spent at least half of my life on or near the ocean, it would be fair to say that this song is right up the on my all time favorites list! Maybe it's on your list too. You know everyone loves a great song especially when it connects you  to something important in your life!  This is one of those song for me. Hope you enjoy it!  Happy Thursday!!!

Posted by Chases Sandbox at 6:27 AM No comments: 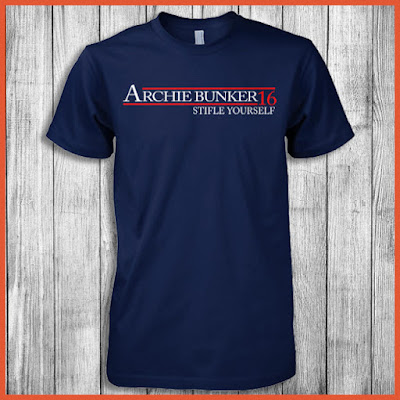 I haven't been doing much ranting lately and that has caused a couple of occasional followers of the SandBox to ask why?  Quite frankly, I don't have much of an answer other than to say I am just fed up with the whole political situation right now.  Fed up of listening to him bitch about Hillary and her bitch about Trump and vice-versa.  Fed up with all of it! Seriously though......we are into the 21st century. We put a man on the moon. We've cured many horrible diseases, are on the verge of curing others, our tech advancements are rivaled by few, and we're one of the most well educated countries on the planet. But you're gonna sit there and tell me that Hillary Clinton and Donald Trump are the best that we, as a nation, can come up with?  I'm calling bullshit on all the Clinton and Trump "homers!"

One is a lying, untrustworthy, manipulative, over bearing, and an over emotional hot mess whose actual physical health is now being called into question and the other is an ego maniac who is a smart man, but thinks the entire planet revolves around him and has no clue how the "real world" works outside of his little sphere of influence. And let's not forget the socialistic babblings of Bernie Sanders. Really people??? This is the best we can do???

Everyone wants to point fingers and blame the other side or political party or political ideology. We'll guess what..........WE ARE ALL RESPONSIBLE FOR THIS MESS. We created these monsters by voting for the same kind of politicians from both parties at every level of government for the last 50 years. The way this country was headed, this was bound to happen sooner or later.  It looks like "sooner" has won that battle. So what do we do now?   Choose the lesser of two evils? (AND YES BOTH MAJOR PARTY CANDIDATES ARE EXTREMELY TOXIC AND ARE OF VARYING DEGREES OF EVIL IN MY OPINION), totally sit out November 2016, or maybe for once take an actual serious look at 3rd and 4th party candidates that most people wrote off a long time ago?

I quite frankly don't know.......and neither, it seems, do some of the smartest people in America. As for me, I think I'll just turn the volume down on all the social media bitchers, whiners, and complainers for a bit, put on my Archie Bunker for Prez t-shirt and give some more thought to this political quandary that has no right answer.......just a lot of bad choices!  I would suggest that before election day sneaks up on us,  you take Archie's advice. "Stifle Yourself" and do the same! 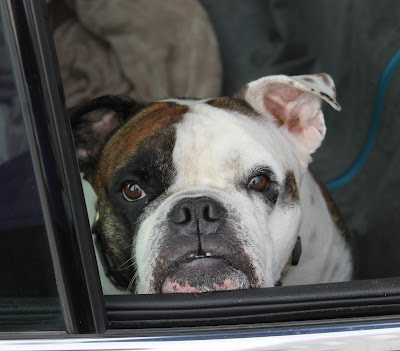 My little buddy going for a car ride!  He loves car rides more than anything in the world, but if we stop anywhere this is what we get. Can I come with you?  Of course you can!!!  I do believe it's time for another adventure!  Maybe a road trip this weekend?  We'll see.... 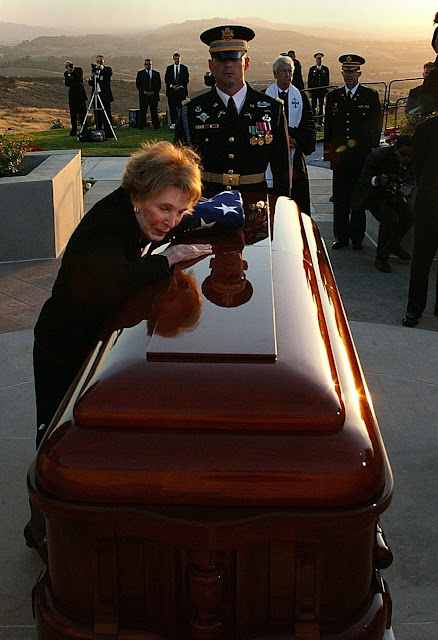 Few will ever forget this 2004 image of former First Lady Nancy Reagan as she said a final, tearful goodbye to her beloved husband, former California Governor, and 40th President of the United States, Ronald Wilson Reagan.

Today we say goodbye to Nancy as she passes on earlier today from congestive heart failure at the age of 94. 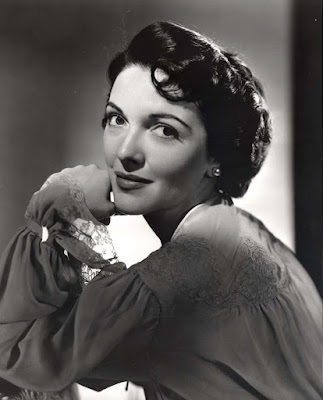 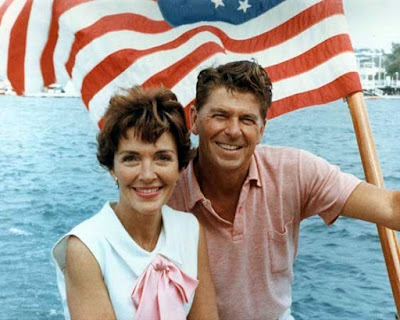 Nancy Reagan led a full life that transcended both entertainment in Hollywood and the Beltway antics of national political life in Washington DC, including an assassination attempt on her husband.   Through it all, two things remained constant: her love for and devotion to "Ronnie," and a  grace, style, and public demeanor that made her one of the most popular First Ladies in the history of the United States. Her devotion to events and causes that benefited American families also endeared her to most Americans regardless of the political leanings.

According to official from the Reagan National Library in Simi Valley, Mrs. Reagan will be buried on the grounds of the library alongside her husband.  Nancy and Ronnie will be together once again.

Rest in Peace Nancy......you will be sorely missed.

Posted by Chases Sandbox at 1:14 PM No comments:

A Belated Happy Birthday To The Great One!

When it comes to entertainers, "The Great One" was simply put, the greatest! Jackie Gleason would have been 100 years old this past Friday. The thing that most set him apart from the Hollywood of today?  He knew the difference between memorizing lines from a script and actually acting.  Lots of stars today do the research for roles and say they immerse themselves in the characters........but no one could ever come close to the Great One! I, for one, don't think they ever will.  Gone from us now, but never forgotten....Happy Birthday Jackie! We Miss Ya!

Another Radio Icon Signs Off For The Last Time

Growing up, I loved the way they kept me entertained. Those voices down the road, close by and in places far away. First as a child, and even as a teenager, I couldn't wait to go to bed at night because my trusty transistor radio was always there to keep me company and keep me entertained until I drifted off to sleep in the wee hours of the morning.  Guys like Tony Perry, Mike Beverly, Lynn Wright, Coyote McCloud, Carl Mayfield, and Phil Williams close to home to the big names in even bigger cities far away like Coyote Calhoun, John "Records" Landecker, and Larry Lujack were some of my best early childhood friends. As I got older.....I wanted to be like them.

Eventually, I became one of them. 1982 was the year I joined the radio fraternity. After a few years doing the "radio thing" in too many places to list here, I ended up in California. That's where I discovered a whole new treasure trove of talented men and women who reinvigorated my love for the crazy business I has chosen as a career years earlier.  People like Dr. Don Rose, Bobby Ocean, Sylvia Chacon, Charlie Van Dyke, Robert W. Morgan, The Real Don Steele, Shotgun Tom Kelly, Jeff and Jer, Rich Brother Robbin, Dave Rickards, Shelly Dunn, and Charlie Tuna.

As a child and as an adult in the radio biz, these men and women were some of the truest entertainers, motivators, and professional role models one could hope for. Today some of these folks are still practicing the craft they love.....entertaining. Some are enjoying the "retired life," and sadly some have passed on.  Today, we lost another one of the "Great Ones" in Charlie Tuna as he passes on at the age of 71. 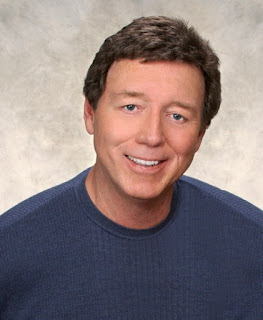 Charlie was the consummate professional on the air and off. Entertaining us during the day and at night and on the weekends using his time, talent, and energy to help raise awareness and funds for causes that were important to him on both the local and national level. He touched many lives over the course of his career. He truly was one of the "Great Ones" and will be dearly missed by all who knew him and fans who didn't.

Thanks for the memories Charlie! You've had a great life and career, now it's times to take a break for a bit.

Rest In Peace....You will be missed!

Friends of the Sandbox